What is a Tunisian wedding? We can describe the bride’s jewelry and dress, as well as songs and traditional music played on national musical instruments but it’s better to see and listen to it by yourself. The guests of Novostar Budget Pyramides Club & Spa 3* were lucky enough to be present at such an event!

In the lobby of the hotel in Nabeul, which is located in one of the most beautiful areas of the Tunisian Mediterranean, on Cape Bon, the guests could observe local culture in action when a bride dressed like an Arabian fairy tale princess appeared there to the rhythmic sound of percussion instruments. 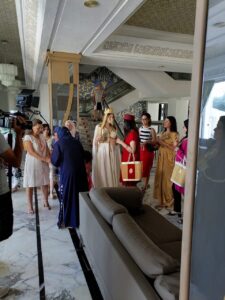 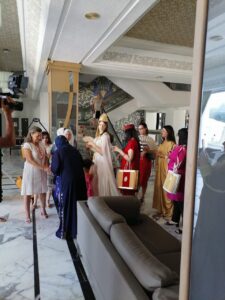 The hotel was chosen for the wedding not by chance: the interior of Novostar Budget Pyramides Club & Spa 3* is quite romantic and the hotel cooks are highly professional, so they can be trusted to cook dishes even for the most fastidious gourmets.

We wish the newlyweds endless happiness and mutual love and hope that they will come back to Novostar Budget Pyramides Club & Spa 3* again and again, probably as a growing family next time. While the parents remember great moments of their wedding, the kids will definitely be kept busy in the international mini club “Novostar Kids’ Land”, so the family will have even more happy memories tied to the hotel.

A Christmas Market in Novastoria: Holidays Are Coming!

The Music of the Starry Sky: the Festival in El Jem Is Back!